Think of me, I think of thee.
Love me, I love you.

Sound romantic? This is the runic inscription on a heddle tool of a loom found in Gothenburg, Sweden (far west near the Norwegian border). These beautiful rings copy the short poem found on this rare wooden tool. It dates to the 12th century, written in Old Norse, the forerunner of the Scandinavian languages. 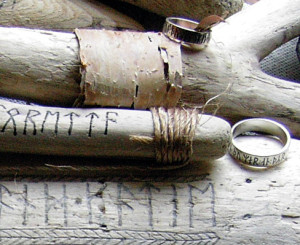 Runic writing comes from the Germanic tribes that preceded both the Vikings and the Anglo Saxon peoples. Today you can see runic writings in Scandinavian countries and the British Isles. However, by far Sweden has the most samples that survive. Roman influence through Christianity did not arrive in Scandinavia until about the 9th century and took hold one or two hundred years later. One can see over 3,000 rune stone monuments scattered throughout the countryside.

As Marie looks for products to represent her heritage she focuses on authentic items that she has seen in the homes of her friends and relatives in Sweden.

These craftspeople have been creating beautiful silver jewelry for four generations and offer several replicas of runic writing. Those shown here are just a small sample of what they produce and are carried by Practically Swedish.

How a Broom Started a Business

Marie was well-versed in the importation business and had a great understanding of indigenous products from working with African imports early in her career. Her parents gave her a broom they had purchased in Sweden when she bought her first home. This unusually shaped broom had more of the form of a hockey stick with natural bristles on the head instead of flat place to hit a puck. The warm wooden handle with a small leather loop on the end for hanging it up made the Swedish broom both attractive and practical. The design of the broom was particularly good for sweeping stairs. Marie and her father thought it might benefit others to have such a beautiful and functional broom available in the US.

With a little research they found the brooms usually came with an aluminum handle. The company made upright standing dustpans with long handles for easy clean-ups that don’t make you bend over to finish the job. Starting with the brooms and a few other practical items like an ice scraper that fits into one’s hand easily, Marie started an import company, Practically Swedish.

Her vision was to import artisan works authentic to Scandinavia here in the US. Her business was born. To grow her company, she looked for glassware, ceramics, and hand-carved wood pieces – the kinds of items Swedes would buy and use in their own homes. With Marie’s eye for beauty and impeccable taste she found many items that she still carries today. Send us a note for more information. Enjoy the quality of real Swedish products.

My Sheep Hear My Voice 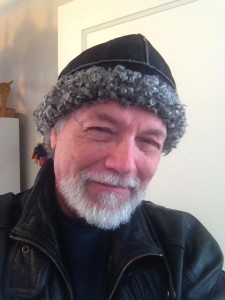 John, Marie’s husband and enthusiastic travel companion has a winter favorite. He loves wearing his sheepskin hat handmade and imported from Sweden. Practically Swedish first heard about the sheep farm though Marie’s cousin who lives in Sweden. John recounts the fun of driving around trying to find the farm. This woman farmer is well respected and has supplied sheep for the royalty of Sweden.

When they arrived at the farm they could not see any sheep. John asked about this. The far

mer smiled, whistled and called, “Kom!” From over the hillside her flock of grey sheep, peculiar to Sweden, came running to her. John’s first thought was the Bible verse of Jesus saying, “My sheep hear my voice.” It was a vivid picture for him only emphasized when he spoke. As soon as the sheep flocked around them John greeted the sheep – immediately they all turned and ran away.

Despite their cold response to John, he loves the warm hat and mittens they provide. When the sheep are ready to be slaughtered for meat, their hides are also used to create warm outerwear for the locals. These warm hats and mittens are also available from Practically Swedish. “Marie loves the adventure of finding these beautiful remote artisans.” John has no less zeal for the journey!